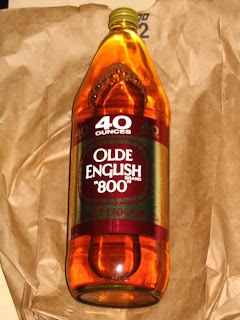 i was reminiscing the other day about some drunken moments. yall remember the first time you got fucked up? well the first time i ever got officially drunk i was 14 years old (dont judge me). let me tell you the tale of...
OLDE ENGLISH
i was at my friend's house chillin and there was another chick there who we kicked it with a couple times and she asked me to walk to the store with her. so we go and as we're leaving she saw this dude she was "talkin to" and he was like "what yall bout to do?" (i'd seen him around but didn't know him like that) she told him "i dont know, why?" he said "yall wanna come chill? im about to pick up (so and so- dont remember his name.)" she just answered "yeah sure." for us both and i was like whatever, i guess i'll go.
he stops at the liquor store.
yeah we were 14 and he was old enough to buy liquor. at this point im thinking "what the...?" and when he gets back in the car he hands us a damn 40 oz. of Old English. now see i had beer before, my father used to let me have some sips on New Years Eve and SuperBowl games, etc. but not a whole damn 40 oz. i was just planning on not drinking mine. but after we arrived at, which i now assume was his mother's house, she was talkin to her dude in the kitchen and i was in the family room, his boy was sitting on the couch lookin like he wanted to talk to me but was nervous or some shit (which was good cuz he was too old for me. and large and ugly). well i got bored so i twisted the cap off n took a sip. and then another... and another... thought "oh this aint shit." and sips turned into chugs. then soon it was gone. and then i drank half of another one for some reason.
then i had to pee.
i was sitting down while i was drinking and i think i drank it in less than 15 minutes. dont ask me who i thought i was. so i realized i was drunk, but of course tried to play it off. mister old-n-nervous decided he wanted to sit next to me on the couch and try to get my phone number when i came back from peeing and i wasn't even tryina hear that shit so i waved at her and said "yo im ready to leave now." and stood by the door. her dude was like "aww yall aint even been here that long." i told him it was long enough for me and that if he didn't want to give me a ride home i will just walk. so he threw his car keys to pudge face (mufucka looked like beanie seagull- yes im fully aware of how i spelled that) and told him to drive me home.
the ride was silent except me telling him where to turn and proclaiming i was engaged to be married... at 14 years old. i had him drop me off in front of the wrong house on purpose, then walked up the street to my house. my sister and our neighbor were sitting on the steps and the first thing my sister said when she saw me was "oooh you're drunk." so i did the finger to my lips "ssssshhhhh" move, and giggled.
"damn i can smell it on your breath! dad is home, you can't go upstairs like that, come on let's go in the back."
so i followed them to the back and somehow decided i wanted to go into our building's laundry room instead and sit on top of a washer. i looked like a weeble wobble on that shit, talkin about "gum. i need gum. gimme gum." my sister said "i dont have any!"
"yes you do." *reached IN her mouth and TOOK her gum* smh
next thing i remember was them walking me up the street with one of my arms on each of their shoulders. i saw a man bringing trash bags to the curb and yelled out "oh shit its trash day?! i didnt know it was trash day! aw damn it." as if it was of some significance to me (?) then we went onto the playground at the pre-k on the corner. i sat on the lil steel bus talkin about some damn "vrrrrooooom! beep beep!!" and banged my forehead against the steering wheel. damn shame how i get an injury driving a stationary playground fixture.
so since that was a bad idea, we went up in my neighbor's house, who we shared a top porch with. i remember my sister calling a friend of mine and i was on the phone with her saying something about being drunk and engaged (and i had actually put my lil diamond pinky ring onto my left ring finger at some point). but our neighbor friend's mom came home and if she saw me drunk she'd tell my father so we snuck out onto the top porch. with my father in the living room on the other side of the door.
i was shook as hell. but unfortunately no amount of shookness could sober me up. it was about to start getting dark and i'd already been gone all day so of course my father was looking for me. my sister told him she hadn't seen me. but i realized i just better take my ass home. so they snuck me out of the neighbor's house and i went downstairs, opened our door and went up. walked in and went straight to the bathroom. splashed my face with cold water then came out trying to act like i was tired and didnt feel good.
nice try.
my father was like "have a seat over there for a minute."
"aw fuck."

i sat my ass down and stared at the tv like everything was just cool.
dad: where were you?
me: with danielle.
dad: who the hell is danielle?
me: neasha's friend.
dad: ok where? doing what? drinking?
me: *innocent face* whaaat? no! *stares back at tv*
dad: so you haven't been drinking?
me: nope. not a drop.
3...2...1...

all over the living room floor.

i dont remember feeling anything, but i do remember my hair flying across my face cuz he went upside my head.

Email ThisBlogThis!Share to TwitterShare to FacebookShare to Pinterest
Labels: drankin

Okay, now with that outta the way, I saw the picture on my "blogger dashboard" and immediately felt queasy...I can remember how OE smells....I drunk my first 40 of it through a straw. On a skateboard...in the winter...no coat.

Not my first time being drunk, but one of the most memorable lmao

Damn your recall of this even is impressive seeing as you were drunk as hell! But that story was heelarious!! Even when we have the worst hangover we just never learn eh? LOL

LMAO at this story..... I'm so glad I've never had the "pleasure" of drinking old E...always reminds me of Poetic Justice

I was like 8 or 10 when i got drunk...off of mimosas at my grandparents house.

LMAO....That's what Ole E will do to you! thats was my first drinking experience too and I have never touched beer again!! smh...I Hate chu for this story!! lol..

I know that beer, we used to call them OE 40's and if you had 2 you were an OE 80! It's impossible to pretend you didn't drink the English, because of the strong smell, plus you're drunk=ha ha. I can relate!