okay so i go to school for Criminal Justice (for those of you who are new round here- but not to be the police- to work in a crime lab doing forensic science) and on Tuesday we had special agents from the GBI (like the FBI but on a state level- for Georgia) come in and give us a presentation on cybercrime.
cybercrime= computer hackers n shit, right? yes but not so much. see most of cybercrimes involve child pornography. therefore, that is what most of their computer crime cases consist of. well they cracked down on this one man and went to arrest him.
WARNING: i'm about to give some crime scene details- not involving blood, guts, or injuries to a child- but graphic nonetheless.
so they had a slide show of crime scene photos for this arrest.
1st pic: outside of a nice, suburban home. lawn was well-kept. nice truck in the driveway.
2nd pic: inside of the house. messy. mountain dew cans everywhere. clothes on the floor. just sloppy.
(sidenote: they mentioned a weird/funny observation about two things that most of these perverts have in common- excessive mountain dew consumption and a love for ninja kung-fu type of shit lol)
okay the pics progressively get worse. they show his bedroom. dirty mattress with no sheets on it. mountain dew cans and bottles all over the headboard. and a plate..... they asked us "what do you think is on that plate?"
baked beans?
an old browie?
chilli?
nope. this nasty son of a bitch was eating his OWN SHIT. feces!! (at this point some boy got up and walked out the classroom like fuck this shit- can't really blame him tho.)
then on his nightstand was a set of binoculars. and guess what his bedroom window had a clear view of?
the neighborhood children's bus stop.
*shudders*
yall.... this man is a SICK, SICK man. it gets even more bizarre.
in his bathroom, he had pics of naked kids taped to the wall in his shower. and on the floor were cut up pieces of these: 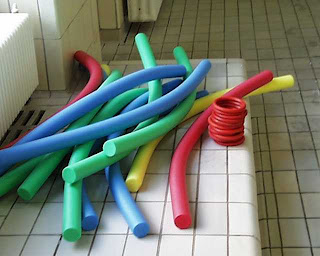 he cut them into like 12-inch pieces and then pinched the middle with a rubber band, kinda like a bowtie. then put some type of balloon or condom on one end. homemade ridiculously huge dildo of some sort. man there were like 8 of these contraptions on the floor of his shower stall..... with fecal matter on them. he was sticking these things IN.HIS.ASS.
*vomit*
these things were all under his bed too! this animal had a kiddie pool in his room and a pot of various lubes on the floor. he would warm the lube on the stove, put the kiddie pool on his bed, pour the lube in it, climb in there with his dildo noodles and with the help of some augmentation device.... fuck himself up the ass with these things!!!! as he looked out the window at the CHILDREN!!!!!
that shit right there? had me like..... enraged. like to the point of contemplating switching my career move from crime lab to child pornography investigator. all these sick, disgusting, pieces of shit need to be locked up and off our streets (among various other punishments i can think of but won't mention).
i'm not writing this blog to gross anyone out. i'm writing it to wake people up. to make people alert. to know what is going on in your neighborhood. to encourage you to check the sex offender registry online to see if you have any sex offenders living near you. even if you don't have children. there are still rapists and peeping toms out here.
so.... what's YOUR neighborhood lookin like?
you can find out here -------------------> Sex Offender Registry
be safe out there please. this world seems to just be getting crazier and crazier.
*sigh*
Posted by Bella at 10:35 AM

Wow. NOw that is some crazt nasty shat right there.

omg...that's some triflin shit right there. Thanks, i'm gonna need this in the future to protect my children.

yes, those pics were SOOO disturbing to me.

thanks for this post! [glad i wasnt eating lol] but you NEVER know what kind of other shit folks be on....omg that story was *puke* but its reality and shit like this happen all over... :O