You Can't Be Serious 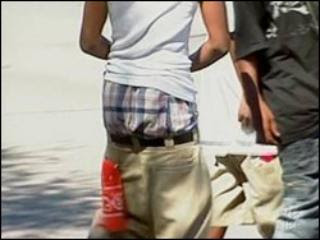 ATLANTA -- After a wave of upset e-mails from viewers, 11Alive News is asking Atlanta city leaders why, in the midst of a budget crisis and citywide furloughs, are they pushing two pieces of legislation regarding baggy pants. Both a proposed ordinance and a resolution have been submitted to the city council's Public Safety Committee. Members meet Tuesday, January 13, to discuss them and other topics on the agenda. City Councilman C.T. Martin has long fought to reduce the number of young men who wear pants that sit well below their waist and often show their underwear. He believes that it is a city matter because it is happening on the streets of Atlanta and sends a bad message.
"We on the Public Safety Committee tackle a number of issues affecting our young people -- drugs, gangs, graffiti. This is one of those things that hinders who they can become," said Martin.
But overwhelmingly the people responding to 11Alive.com believe the city has far bigger issues to tackle right now. Someone by the screen name vincentharris said, "...how about solving ANYTHING besides this. Who CARES????" Another comment by someone called q. ragsdale wrote, "..shouldn't these councilmen worry about something else, like, say a BALANCED BUDGET and furloughed workers?" 11Alive News asked Councilman Martin whether the discussion of baggy pants should even be taking up time during Public Safety Committee meetings. He said yes, because that group is responsible for the streets and the look of the streets.
According to the Associated Press, the proposed ordinance would "make it illegal to expose one's undergarments in a public setting." The measure would be included in an ordinance already on the books which bans simulated acts of intercourse and exposing or touching one's genitals or breasts. If approved, anyone found in violation of the rule could be fined up to $100 and given eight hours of community service. Martin also just submitted a proposed resolution that he says would be a way to continue the discussion of banning baggy pants and limiting offensive dress and offensive language among colleges, schools, neighborhoods and places of worship.

Now this just pisses me off. With all the homeless people in the streets of Atlanta, these mufuckas worrying about how much of somebody draws are showing in public? Fuck you. Fuck you C.T. Martin (whom by the way is a Black man- just in case you were wondering if it was some old cracker jack who proposed this bullshit lol) for wasting my tax dollars on THIS. When I saw this on the news last night I was in disbelief that this is a matter of PUBLIC SAFETY? Fuck outta here yo. There is SOOO much more to worry about! SOOO much more things to spend time on correcting. What's next? Yall gon cite me for exposing my bra strap? There are so many things I can say but all I can think right now is...
Ya gon too far Biggs, ya gon too far.
(i love shottas lol)
Posted by Bella at 10:44 AM

Email ThisBlogThis!Share to TwitterShare to FacebookShare to Pinterest
Labels: wtf

I wont lie, I think people who wear their pants like that are pretty stupid looking but I dont think government should tell you how to dress.

im with you on that Yves!