Sooo I got asked to cast for Bad Girls Club today.....

my response: I have kids and they need a good role model. So no thanks.
I have never even watched an episode of this show. I've just seen clips of it and heard people talk about it. And that didn't gain my interest, it only deterred it. Just sounds like a bunch of rowdy bitches with no good sense who talk and behave stupidly. Woopty Doo. If I even went on that show I'd wake up, hear some bitches talking outside my room.... 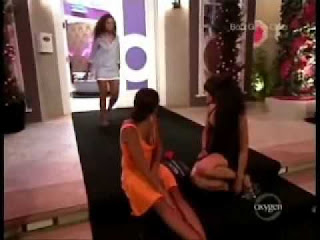 just off GP.
Like "stop talking about stupid shit." and take my ass back to bed. I don't understand the point of this show. Oooo look a buncha bitches done lost their minds. Okay? And I have a daughter. What the hell do I look like going on national tv and making an ass out of myself? I'm tempted to let her watch this shit just to show her how NOT to behave (shout out to the homie Jaila for that idea lol)

I'm sick of all these "reality" shows in general actually.

I refuse to donate any of my brain functions towards those shows. I'd rather watch something on the History Channel or National Geographic and learn something than watch bitches chase after "celebrity" penis, or get drunk and fight eachother, or watch people party and fuck carelessly or live in a "real" world that doesn't look a damn thing like the world I live in. I don't know....

Or maybe I'm just getting wiser.

How do you feel about these shows?
Posted by Bella at 9:50 AM

The reality shows are stupid, but they can be good comedy. I would personally never go on one, though. They're for low class hoes with no other talents.

How'd you end up getting cast for the Bad Girls Club?

All "reality" shows r bullshit... The only one worth watchin is celebrity rehab cause thats about some real shit... Other than that its all about mindless bullshit that eventually sucks u in... Its like watchin a rally fucked up car accident... U try ur hardest not to look away but uno matter whut u end up watchin it...

@Zuly: i didn't get casted lol, i got asked to go the casting by this dude who does castings for music videos, fashion shows, etc.

@Clutch: yeah i watched a season of Real Chance of Love like the season before last, even had my opinions of who should win and all that... and towards the finale i was just like "wtf am i really watching here?" i felt like i wasted hours of my life on it lol... never again.

I agree with you Bella...I don't get the point of these "reality" shows. I have no patience for them at all...

I stopped respecting the "Real" World since Hawaii.. it's all a dramatic formula and pretty faces now

If need something to watch to entertain me, then I'll watch some of the Vh1 mess but other than that, I can do without. Apparently everyone is a reality star so does that mean we live in a fantasy world?

PS: I don't watch Bad Girls Club. Like you said, just some rowdy broads fighting about nothing. I'll pass.

I'd rather watch Criminal Minds and CSI

Hey!!! I don't watch none of this shit [my MOTHER does...ugh!] but she doesn't act that way lol like the other commenter said its like watcing a really bad car accident, but I mean dayum is this bullshit 'entertainment' now? wtf ever/

Bella I am GLAD that you declined to do the show because you have morals AND really once the show is over these hoes don't even have work anymore.

I ain't gone like the ONLY reality shows I started liking were Celebrity Rehab AND I watched that hot ass mess Fantasia show [Keyshia Cole 2.0 anyway]

Its not enough for me to tune in each time (I catch them online whenever I feel like watching...just like Tiny & Toya]

yea all that Ray J, Bad Girls, ect all of that shit is LAME. L-A-M-E. Everyone can't blow up like Kim Kardashian (no pun intended) but man REALITY WHORES are what's in for tv and its really good because they don't have to really pay these whores shit opposed to real actors and once they're through of them they're thrown on the street or posing half nekkid some damn where OR 'hosting parties' Bitch fuck outta here with THAT.

Really FUCK TV and I haven't watched it on a regular basis since 2008. We have satellite here but I'm always looking at shit at OTHER people's house because I leave my TV on XM Radio and jam out. :D

yay!! I'm glad you didn't do the show! Hoes ALWAYS trying to be seen and shit smh